Once upon a time The story of a couple of Coconuts

Our Coconut Oil Love Story started a long time ago….

My husband and I were travelling in Thailand and there it was. Sitting on the shelf of a little street-market stall. I just knew that I had to get my hands on it.

I had suffered from teeth and gum disease all my life. I had heard about coconut oil pulling and all of its benefits. I was eager to try it out to see if all the claims were true. They were and I was thrilled to have found an all-natural and effective solution to my problem. It was love at first bite!

I loaded up my husband’s and my backpack with as much coconut oil as we could carry, excited to bring it home to see what other wonders this coconut oil could do. 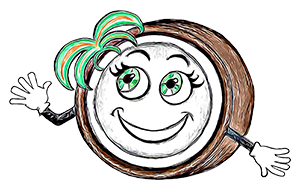 As a makeup remover, it was amazing! It just melted away all my makeup, even my waterproof mascara came off with ease. Leaving my skin soft and glowing!

Before you knew it, I had my whole family using coconut oil as part of our daily routine and not just for our skin and hair. With a little added baking soda, I even had my husband brushing his teeth and using it as a deodorant.

We had always been passionate about using all natural products. We were so happy to be able to replace so many of our other health & beauty products which were full of chemicals. Not only did we feel better but our bathroom cabinet was finally tidy!

Being a big fan of cooking, I was excited to see what coconut oil could do in the kitchen. It was delicious! And not just for the Asian recipes that I learnt, but for all of our sweet and savoury recipes. I even managed to get my Italian mother to put down her precious bottle of olive oil and start using coconut oil instead.

We were becoming just nuts about coconuts! We started to introduced all of our friends and family members to this beautiful natural ally.

By then the benefits of coconut oil were becoming more mainstream and more brands were coming onto the market. Using so many different names to describe how it’s made, we were starting to get dizzy. Then when the deodorized version came out, we started to get nervous. Although we always believed if it said “cold-pressed”, we were in safe hands and buying a high-quality product.

Whenever we travelled to a coconut oil producing country, instead of going to the beaches or checking out temples, we were visiting coconut oil companies and their coconut plantations.

We pictured images of a lush jungle where the coconuts would be picked from the trees and pressed. Lovely coconut oil would flow and colorful tropical birds would sing all around it. However, a much different reality began to sink in. The more we looked into how coconut oil was produced, the more our hearts started to ache. Our love affair was wavering and the birds stopped singing.

We learnt that cold-pressed coconut oil was actually made from copra, dried coconut. Also that the “coconutty” flavour everyone raved about was from a by-product as a result of the high heat and processing some companies used to extract the coconut oil.

And so our quest began. Off we went in search of the freshest and purest coconut oil we could find, no ifs, ands, or buts about it. It took much longer than we care to remember and there were a couple of bleak moments when we thought we’d give up, but then on a trip to the Philippines, we came across some coconut farmers that were doing things differently.

They were cold-pressing fresh raw coconuts straight from the trees and getting a coconut milk and oil mixture. Which they then spun in a centrifuge to separate the oil from the milk and sealing the coconut oil directly into jars to lock in all that freshness. All this was done in under 48 hours from the coconut being pulled from the tree. The Fresh Centrifuged Cold Process is what we called it.

We set up a partnership and CoccoMio was born. Once again we loaded our backpacks with as much coconut oil as we could carry to bring home, but this time to share with you. Our love affair with coconut oil was back in full bloom and the birds were singing again.

We’re delighted to introduce CoccoMio to you. Our biggest wish is that you will also fall in love with this superior-quality coconut oil and start your own coconut love story.

What’s in a name?

“Cocco” in Italian is “Coconut” and “Mio” means “Mine”. “CoccoMio” is also an endearing way in Italian to say “My Darling”. So for us, CoccoMio is Our Darling Coconut. We hope it will be yours too!

Join the Wait-list We will inform you when the product arrives in stock. Please leave your email address below.